Eared Grebe at Round Valley Reservoir 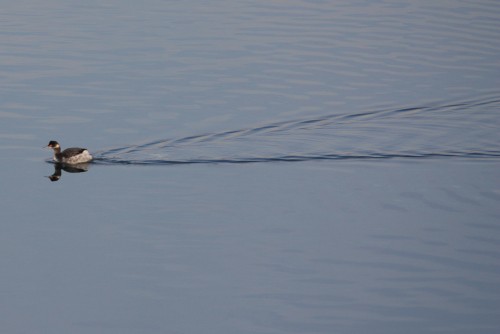 I rolled down my window (when is the last time you actually rolled down your window?  Funny how we still say that, when we are just pushing a button.)  to ask the cluster of birders who appeared next to my car what they were seeing.  One women gestured toward the end of the boat ramp.  “We’re here for the Eared Grebe.”  Oh, right, the Eared Grebe.  I had read on the local ListServ that one had been reported.  I had come to Round Valley Reservoir for the white-winged gulls and the Lesser Black-back Gull.  I had totally forgotten about the Grebe.

The Grebe was diving and popping up close to the ice near the dam, so I walked out on top of  the dam to be a better view.  It was pretty far out but as we stood there it started to come closer; swimming in a meandering fashion creating a zig-zag wake in the water.

As it approached, a discussion broke out about the differences between  Horned and Eared Grebes.  This Grebe has a dark face, white ear patch and a small up-tilted bill.  Classic.  The one thing that really amused me was the fluffy white pillow butt.  What is up with that? 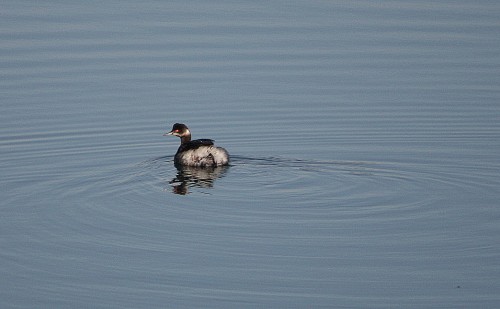 Why are we so excited about an Eared Grebe?  It is a western bird that supposedly winters only as far east as Texas and Louisiana.  Yet here it is hanging around in NJ.  I love winter birding for this reason.  You just never know.

5 responses to “Eared Grebe at Round Valley Reservoir”