We were all looking at a House Wren working a stump when I glanced down to see a rotten log crawling with termites.  Nice. I was hopeful that a good sized mixed flock of (preferably) warblers would come to scoop them up. 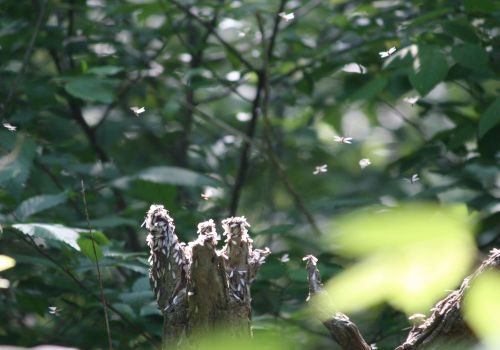 The termites milled about then one by one took off, lifting into the air, glittering in the sunlight like fairy dust.  For most, their maiden voyage was cut short when the birds came to gobble them up.  It started with the House Wren, then the White-throated Sparrows, and Robins got in the act.  A Northern Parula showed up and so did a Veery and several Hermit Thrushes.

Many logs and stumps were crawling with termites in the heat of the day.  It is the time of year, if you seen one, keep watch, the birds will come. 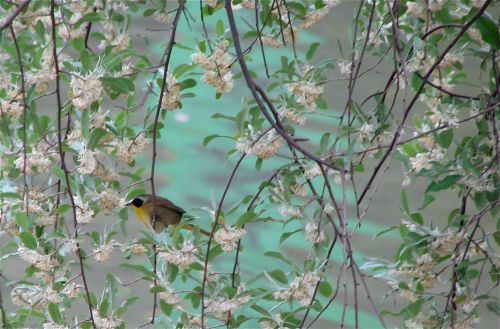 I had been looking forward to today since a frigid day in January, when a friend from work planted the seed of the idea; let’s go birding in Central Park in May for migration. It may sound odd, but the birding in the middle of Manhattan is superb. The outing grew to 5 of us. We had been carefully monitoring the ListServs for weeks. Deb works in the City and had checked out the park on several occasions. Both she and Pam used to live in the City and knew the park well. We were ready.

I drove into the City with one friend to meet the others and spend the day doing what we love best. As we walked toward the Diana Ross playground clutching our Starbucks coffees, Di said, “I hear a Parula.” We froze, scanning the trees. This is why we had come–to see warblers. And see warblers we did. This weekend there happened by chance to be a fallout. There were warblers in almost every tree. We birded the Ramble, the Gill, the Grassy Knoll, and the trees along Central Park West from 81st-70th. The birds were mostly in the oaks, plucking tiny green worms from the catkins. In the end we saw 50 species of birds with 13 warblers. Our full list is below.

My favorite? Black-throated Green Warbler. The name of my other blog is derived from their song.