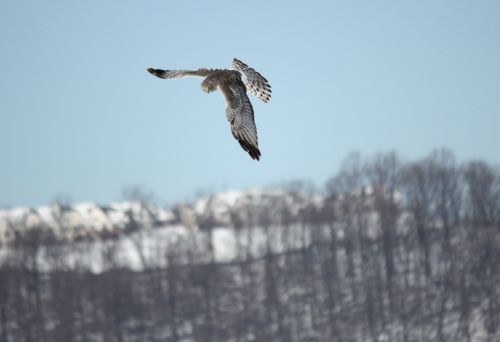 After dropping off my taxes with the man, I decided to drive on down to Oberly Road in Alpha, NJ.  Oberly Road is a birding hotspot for wintering raptors, Snow Buntings, Horned Larks and the much sought-after Lapland Longspur.  Of course, I was hoping for Snow Bunting and the elusive Longspur.  While I got neither, there was a flock of dozens of Horned Larks swirling around and many sparrows.  It was a male Northern Harrier, however, that stole the show.

He appeared out of nowhere, made a few preliminary passes then dove onto a small dark something but then dropped it.  He coursed back and forth over the field intent on finding a meal.  After some minutes he wheeled off to cross the road to search in another field.  I was finally able to breathe again. I do love the gray ghost. I don’t see them often enough.

Oh yeah, and the Horned Larks were nice too.

One of Those Days

I pulled into the parking lot at Liberty Loop and there in front of me was a Red-tailed Hawk trying desperately to balance in the crazy wind.  But no sooner had I got out with my camera when a little something caught his eye.  Rats!  Or rather, Voles!  Deciding it was way to cold and windy to stay at the Wallkill, I opted for looking for Longspurs. 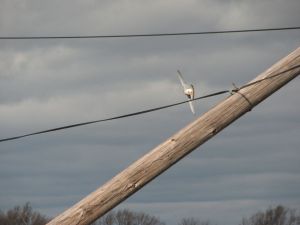 As I crawled up and down the farm lanes of Pine Island, NY, I spied an American Kestrel sitting on a wire.  I pulled over and inched along to get a good view, when the same thing happened.

And I am 3 for 3 on raptors flying away when this Northern Harrier, ghosted past.