Since I am heading to Houston for a conference in mid-Feb; I’m thinking of going down a few days early to do a little birding.  Do you have a favortite spot on the upper Texas Coast? I have been to Anahuac and plan on going there again.  I might drive down to Attawater although I know I won’t see the Prairie Chickens.  I know there are Red Cockaded Woodpeckers in the north somewhere.  Any idea if they are around in winter and within driving distance of Houston?  Any and all thoughts are welcome.  Ah, warm weather, here I come.

For more Bird Photography Weekly, scoot over to BirdFreak 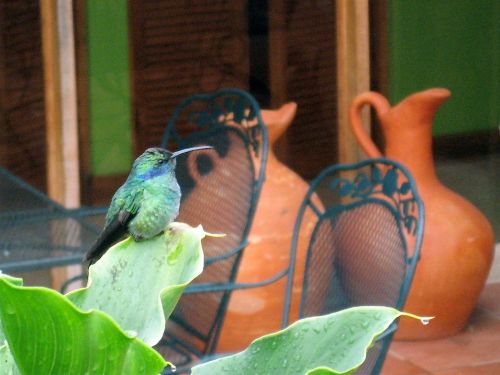 The birding in Costa Rica is legendary, with Toucans, Parrots, Motmots, Trogons and Oropendolas.  But the thing I could not get enough of, were the Hummingbirds.  We saw 27 species of Hummingbirds in the 10 days we were there.  This Green Violet-ear is a highland bird.  I love him posed nicely against the terracotta pots.   Have you been to Costa Rica?

To see birds from other places check out Birdfreak’s Bird Photography Weekly.

Currently in between business conferences, I am loafing in Napa Valley.   Unable to find a bird guide (Grrrr), I randomly drove around this morning looking for birds.  With the countryside being so dry, I thought it would make the most sense to find water.   Looking at the map, I headed off to Hennessey Lake.  As soon as I got out of the car, I heard the crik-crik Western Grebes.  Scanning the lake from a distance, I saw what looked like white sticks planted out in the water.   It was a flotilla of Grebes.  Cool.  Even though I have seen them many times before, it was still a thrill to see so many.

Of special note, was the very dark, almost chocolaty Winter Wrens I saw feeding young at Muir Woods yesterday.  The woods was also full of Wilson’s Warblers and Brown Creeper.  I mean full, they were everywhere I looked.  Oh yeah, and there were Chestnut-backed Chickadees too.

I hope to bird the marshes on the way back to the city tomorrow.

In order to get out onto the bay, I plunked down my $32 and took one of those land-to-water crafts. In some cities they are called Ducks but here in San Diego they are called Seals. It is a, well, I guess I would call it a bus that can go in the water. After a 15-minute tour of the city, it put in over on Shelter Island for an hour-long blistering 5 mile-an-hour tour of the bay. The mate pointed out all of the Navy and Coast Guard vessels, sailboats and some of the wildlife.

On the way back it stopped at a bait barge for close-up looks at sea lions and some sea birds. There were loads of loafing sea lions, two of which were enormous males. The birds were Brown Pelicans, Snowy Egrets, Western Gulls, Heermann’s Gulls, and Double Crested Cormorants. Overhead flew Royal, Forester’s and Caspian terns. As we paused by the barge, a boat came along side to empty anchovies and sardines (I think that is what the mate said.) into the barge. There was quite the flurry of excitement when that happened, let me tell you. Yet another thing I had no idea about. 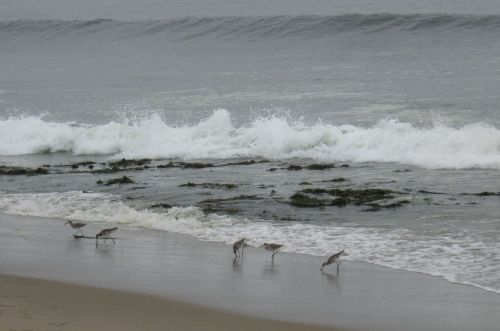 I am leaving for a 10 day, mostly business but hopefully some pleasure, trip to California.  The bins are packed, as well as my well-thumbed Peterson’s guide to Western Birds.  I hope to meet up with a fellow birder in San Diego to get a peek at those Elegant Terns.  At the very least I will be hanging around the bay.  Speaking of bay, after I leave San Diego I will be flying to San Francisco, where I definitely will have the chance to do some birding.  More later, I gotta go finish up a few things before I’m ready to go.

Right before I left NJ, I threw out an email to a birdingpal from New Orleans. I have not been successful with using this service in the past, but 2 people told me that have connected with someone and got great advice. So, what the heck. When I arrived in the city I wandered through the French Quarter to get my bearings and was welcomed by the chittering of chimney swifts. Ah, I remember the swifts. Once long ago, on my first trip to New Orleans, I was amazed by the swifts. They darted above and between the historic rooftops and galleries of the French Quarter. I remember sitting in a rooftop lounge drinking crisp white wine and watching the swirl of their antics and not paying much attention to the conversation swirling about me. I smiled. If nothing else, New Orleans has swifts. A first of the season for me.

But birdingpal came through. I received a lovely email with several options within an easy streetcar ride since I had no car. She recommended Audubon Park and City Park. Audubon Park is on the St. Charles Street line and has a 1.7 mile jogging/biking loop. On an island in the middle of the water on the left is a heron rookery. The trip to the park was a major time commitment though. The concierge at the hotel said it would take 45 minutes to get there—plus walking the loop and getting back. I was looking at 3 hours- minimum. City Park, on the other hand, is on the Canal Street line. It takes only 30 minutes to get there. I could wander around, come back when I needed. I opted for City Park for expediency’s sake even though it was a warm muggy afternoon.

The Canal Street stop for the streetcar is on the median outside the hotel. I hopped on, slid in my dollar and dropped the quarter in the slot. I sat on the beautiful wooden seat. A lovely warm breeze blew in through the open window. The car clattered forward with a merry clang of its bell. People got on and off as we left the city and headed toward Metarie.

I got off at the last stop, City Park, outside the museum. The first thing I heard when I crossed the busy intersection and walked into the park was the distinctive call of boat-tailed grackles. I wandered off the sidewalk in the direction of a creek flowing in the distance. A cattle egret eyed me warily as I approach the water, flying off a few steps. A flicker of white caught my eye; I spun to watch a least tern dive headlong into the still brown water. Then a common tern dashed past. I could really see the size difference. Along the far bank I saw the stately white of an egret. I walked along the bank A harsh squawk out from the reeds stepped a yellow-crowned nightheron. It watched me, gave an almost shrug with a ruffle of its feathers and started to pick in the grass. Apparently finding nothing of interest it flew off.

I was sitting in a sunbeam in the hotel lobby overlooking the pool working on my presentation. My chair was comfortable and I had my feet propped up on the windowsill. I was really killing time.

The windows were at eye level with several trees surrounding the pool. As I sat watching the people below test the water of the pool then walk away; from the corner of my eye I noticed several birds flitting in the trees. My attention swung from would-be swimmers to the birds testing the poolside trees for early spring snacks.

A biggish glossy green Hummer popped up and buzzed the tree in front of me. I pressed my nose to the glass looking for any hint of color. I saw none. Must be female and she is pretty good-sized, about the size of a Ruby-throated. I extrapolated that she must be a female Anna’s. I looked around, got out a tissue and wiped my nose print off the window. Ew.

Several big dark gray-backed gulls flew by. One of them flew close enough to the window that I leaned back in alarm before it veered off. It had a single red spot on its bill. Ah, a Western Gull.

A Crow flew past, no wedge to that tail. I was feeling like Super Birder. 3 for 3 in California.

Then a skinny gray bird drew my eye hopping from branch to branch in the tree in front of me. I could not place it easily. Appeared to have a white throat, a darker cap, and a lighter patch on the rump. I continued to watch it as it sallied forth to catch an insect. Huh! Could be a Gnatcatcher or at least some sort of flycatcher. Maybe Olive-sided, they have a white rump thing, but I did not see any vest. The bird tantalized me as it flitted among the leaves. The Hummer buzzed it once. There was a big size differential.

My binoculars were in my room, of course.

I finally gave up and went to give my presentation. I still do not know what it was. When I got home, I looked in my Western bird books to no avail. How many times have you memorized field marks to look them up later? I do it all the time. Sometimes it works, many times it doesn’t. It always better to have the binoculars at hand and not locked in the room upstairs. A lesson I never seem to learn. 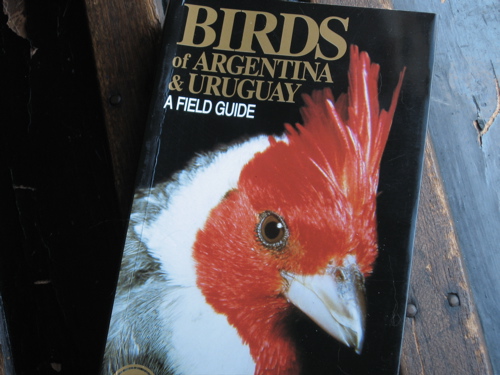 Si, me voy a Argentina, Uruguay y Brasil. I am going on a cruise and hope to be birding in all 3 countries. If you know of a guide let me know. I have not found Birdingpal useful. I have a couple of leads though. I’ll keep you posted.